The Water Cycle and How it Works

Pour yourself a glass of water and take a sip. Did you know that the water you’ve just swallowed is the same water that wooly mammoths, pharaohs, and the first humans drank? That’s because Earth has been recycling water for over 4 billion years!

The world’s water moves between lakes, rivers, oceans, the atmosphere and the land in an ongoing cycle called – you guessed it! – the water cycle. As it goes through this continuous system, it can be a liquid (water), a gas (vapour) or a solid (ice). Earth’s water is always in movement and is constantly changing states, from liquid to vapor to ice and back again. The water cycle has been working for billions of years and all life on Earth depends on it continuing to work.

How the Water Cycle Works 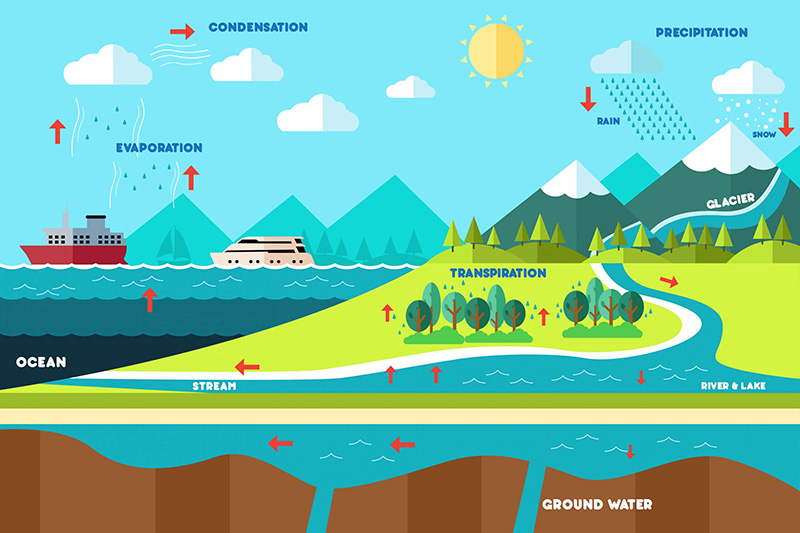 There is the same amount of water on the earth today as there was billions of years ago. No new water is being made or lost. Water simply moves from one place to another in different forms.

The water cycle can be described as water evaporating into the atmosphere where it condenses (change or cause to change from a gas or vapor to a liquid) into clouds before it falls back to earth as precipitation (rain, sleet or snow). This precipitation either soaks down into the soil (infiltration) where it joins groundwater, or it runs off over the landscape to join surface water. That surface water may evaporate out of the lake back into the atmosphere or water moving through the soil toward groundwater may be taken up by plants and transpired into the atmosphere. The process is continuous without a beginning or an end.

Many of us learned that the water cycle followed a circular path much like that of a clock. This visual is not very accurate. It is more precise to envision a web of sorts with water moving in many directions.

Icebergs move water vapor into the atmosphere through the process of evaporation just as they also move water in its solid state into a liquid state melting into the sea. Ocean currents move water all over the globe melted from icebergs, or gained from rivers flowing into oceans and seas and from rain and snow precipitation from water vapor. Wind moves water all around the earth with air currents picking up evaporated water in one place and dropping it via precipitation in another place. Plants and animals move water as well – so water is always moving in many different directions at any given time.

IT’S ALL THE SAME WATER