“One half of Michigan’s thousands of miles of rivers and streams suffer from concentrations of toxic e-coli that exceed minimum water quality standards.”

Hundreds of thousands of failing septic tanks in Michigan are acting as a major source of human fecal matter associated e-coli bacteria laden raw sewage that contaminates ground water, and renders the waters of many our lakes, rivers, and streams unfit for total contact water sports such as skiing, wakeboarding, swimming or snorkeling. The increasingly widespread problem is primarily attributed to the fact that Michigan is the only state that does not require regular septic system inspections. It is also important to note that only eleven of Michigan’s eighty three counties have enacted local ordinances requiring septic systems to be inspected and maintained on a regular basis.

The steadily escalating environmental and public health associated problem is derived from that fact that approximately 20%, or 280,000 of the 1.4 million septic tanks that were constructed in the 1940’s, 1950’s and 1960’s throughout Michigan to enable the use of indoor toilets that served as a welcome replacement for “outhouses”, are now failing. The problem has also been exacerbated by the fact that many Michigan homes located in suburban areas, and their now severely antiquated septic systems were built prior to the construction of sewer systems that now serve most small towns and villages. 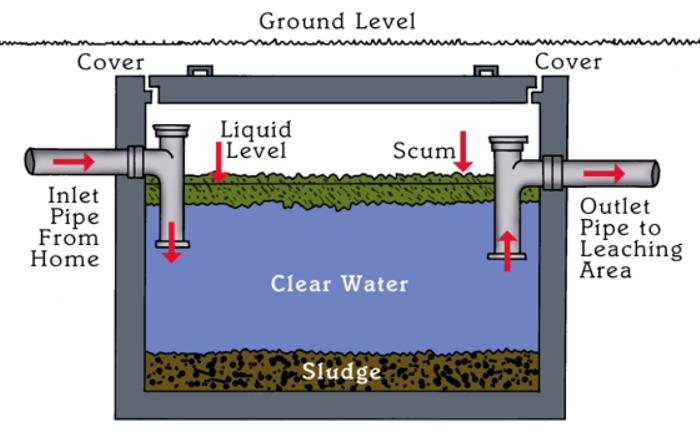 In Kent County, for example, where the health department has only a volunteer septic system inspection program in place, an estimated 11, 250 failing residential septic systems distributed throughout the county leak approximately one million gallons of raw sewage into vulnerable groundwater supplies each day. In inland lake inundated Oakland County, as another prime example, where public health threatening cases of e-coli contamination of rivers and lakes are reported on a more and more frequent basis, approximately twenty-five to thirty percent of the 100,000 septic systems located in Michigan’s most affluent county are known to be leaking. The gravity of the situation is also effectively illustrated by the fact that the results of a 2015 study conducted by Michigan State University researchers on sixty-four Michigan rivers revealed concentrations of e-coli that were higher than U. S. Environmental Protection Agency permitted water quality standards. The significance of the issue is also amplified by the fact that the Michigan Department of Environment, Great Lake, and Energy (EGLE) reports that approximately one half of Michigan’s thousands of miles of rivers and streams suffer from concentrations of toxic e-coli bacteria that exceed minimum water quality standards.

The presence of hundreds of thousands of leaky septic systems represents a major environmental and public health issue that promises to escalate in significance as increasing numbers of septic systems fail and begin to leak with the passage of time. Past efforts to enact legislation that would have established a meaningful statewide standard for how septic tanks are designed, built, inspected, and maintained have sadly disintegrated in the face of arguments suggesting that regulating septic tanks represents a violation of private property rights. Those opposed to the enactment of a statewide septic systems code have also successfully argued that regular septic tank inspections and maintenance would be too costly for many homeowners, over burden local health departments, and make it more difficult to sell homes in rural areas that are not serviced by sewer systems.

It is important to note that Michigan Governor Whitmer recognizes the significance of the problem, and accordingly, declared the week of September 20-24, 2021 as Septic Smart Week that encouraged homeowners and communities to properly maintain their increasingly vulnerable septic systems. While it is not very likely that the Michigan state legislature will overcome its concerns for “treading” on individual property rights, and act to pass a statewide standard for effectively regulating septic systems anytime soon, both Governor Whitmer and Senator Jon Bumstead have each proposed dedicating $35 million of this year’s state budget to enable the establishment and funding of an MDEQ administered program that would make low interest loans available to homeowners seeking to repair, replace, or eliminate leaking residential septic systems.

For more information on how failing septic systems are capable of degrading our precious freshwater resources, visit the U. S. EPA’s web page entitled “How Your Septic System Can Impact Nearby Water Sources” . The inland lakes preservation focused folks from northwest Lower Michigan’s Glen Lake Association have also created a septic smart webpage that contains valuable information regarding the proper maintenance of septic systems.