We love traditional table salt (sodium chloride) in our food, but in the 1940’s, we acquired another use for it. Salt has long been used to melt ice and keep our roadways safe for drivers. The increase in demand for road salt has caused a huge hike in price in recent years. Perhaps more severe winter storms and excess use of salt has something to do with the increase in demand. Researchers are becoming more and more concerned of the excess use of road salt because it is increasing the salinity of our freshwater lakes. 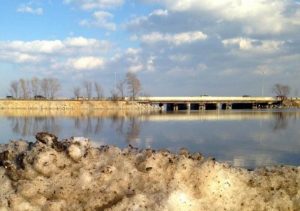 Road salt is able to enter the lakes through winter surface runoff from impervious surfaces. Impervious surfaces such as roads and sidewalks allow dissolved salt to slide into the lakes instead of being soaked into the soil. Hilary Dugan, a University of Wisconsin-Madison freshwater expert says “No one has tried to understand the scale of this problem across the continent in the Northeast and Midwest, where people apply road salt.”

In Dugan’s study, she found that of the 371 lakes that were reviewed, 44% of them showed signs of long term salinisation. “Extrapolating that finding for all of North America, at least 7,770 lakes are at risk of elevated salt levels — a likely underestimate,” the researcher said. This is the first freshwater study of it’s kind that has been conducted on a continental scope. As of today, Dugan says there is no entity that keeps tracks how much salt is being spread on our roadways or how much of it makes it into our freshwater lakes.

While scientists could not directly measure how much chloride was coming from road salt, previous research suggests that agriculture, water softeners and other sources played minimal roles. Dugan says “road salt is a major driver of chloride loading in our lakes.”

Rising levels of salt in our lakes and streams has been a trend for decades according to Sujay Kaushal, an ecologist at the University of Maryland who was not involved in the new study. Kaushal has assessed freshwater streams that have wintertime salt concentrations up to 40 percent that of seawater. Saltwater plants are now growing in some of these streams.

Another researcher, James Gibbs, based at the State University of New York has studied roadside pools and springs where amphibians lay their eggs and observed a “pretty high reduction in survival rates” of eggs and young in pools contaminated with road salt. Although very few amphibians live in large lakes (due to predators, such as fish), Gibbs and other researchers are concerned that exotic species that are better suited for brackish waters or tolerant of chloride will move into these saltier lakes.

There is also concern for human health because the average water treatment system will not filter out these dissolved chloride ions from water. Increased salt in drinking water poses health risks to humans who have kidney trouble, use dialysis or have hypertension. Therefore, researchers are suggesting that road salts be listed as a primary contaminant as studies are now showing cause for concern for human and environmental health.

For those caught between the need to keep their pavement safe and a desire to be environmentally conscious, Kaushal advised a more judicious approach. “People tend to think more is better, so they just dump or cake it on,” he said. He recommends salting before a snow event. “That’s going to be more effective.”

Some states are already exploring alternative solutions to applying road salts, like beet juice- or in Wisconsin, liquid cheese brine.  Communities are also considering heated sidewalks as a way to curb chloride loading, while also keeping people safe from slipping and falling on ice. In addition, civil engineers are exploring other minerals such as magnetite as a natural heat conductor that could potentially replace limestone and sand that is currently used in making concrete.