PFAS, A threat to human health and our environment

PFAS, A threat to human health and our environment 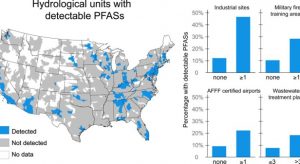 PFAs, otherwise known as per-and polyfluoroalkyl substances are a family of more than 3,000 manufactured chemicals that were first put into production in the mid 1900’s. Manufacturers first became interested in PFAS because they possess some unique properties that are utilized for a number of different products, including water resistant clothing and non-stick products. In addition, PFAS are used in firefighting foam called AFFF, which some branches of the fire and armed forces used. At the time, this chemical was a manufacturing breakthrough, but that was short lived when work related exposure to PFAS became an issue.

After more research in the workplace had been done, it became apparent PFAS were hazardous to human health and affecting the quality of our drinking water. Following this revelation, industries began phasing out PFAS in the early 2000’s and production of AFFF is being curtailed due to legislative pressure.

According to the Michigan Environmental Council, preliminary research suggests that PFAs may increase thyroid disease, decrease fertility in women, cause developmental issues in infants and older children and increase blood pressure and cholesterol levels. The chemical has also been linked to increased risks of kidney and testicular cancer. However, research is still limited and only a handful of these chemicals have been examined in depth. There is still quite a bit to learn about these contaminants.

The Michigan Department of Natural Resources (MDNR) recently released a ‘Do Not Eat’ advisory within a five-mile radius of Clark’s Marsh in Oscoda Township, MI where one white-tailed deer was harvested. Officials said PFOS (perfluorooctane sulfonic acid), which is one type of PFAS was detected in the deer at high levels. PFOS in the muscle of the deer was 547 parts per billion, nearly doubling the level that is required for action at 300 ppb. However, no additional deer in the areas surrounding Clark’s Marsh have tested positive for PFAS or at levels that are of concern. According to the MDNR, the Michigan Department of Health and Human Services and MDNR initially developed this investigation due to concerns and questions from hunters about harvesting deer in contaminated areas such as near the old Wurtsmith Air Force Base, where PFAS were once used.

The State of Michigan is currently investigating the area where the one deer with elevated levels was detected and plans to conduct further analysis on the test results to learn more about PFAS in white-tailed deer and other wildlife. The MDNR says that “this is the first study of its kind and very little scientific information exists on whitetail deer and PFAS chemicals.” Furthermore, it is clear that additional monitoring and testing of the water near these contaminated areas will be critical moving forward in order to protect human and wildlife health.

Information obtained from Michigan Department of Natural Resources and the Michigan Environmental Council.