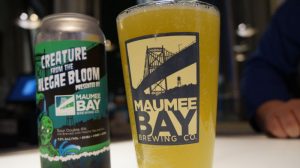 TOLEDO, OHIO — The staff at Maumee Bay Brewing Company swear that the brewery’s 150-year old building is haunted. A bartender is sure she saw a glass floating on its own. Another swears she saw a woman with a skeletal hand who vanished when she turned around. The janitor, at least, thinks the ghosts are friendly. Needless to say, the staff has grown familiar with the supernatural and may have even learned to embrace it.

It’s an ode to a monster environmentalists have tried to painstakingly eliminate for years. This beast doesn’t hide in the bar’s dark basement after hours, though. It rears its head every summer on Lake Erie, the brewery’s water source. I’m talking about the lake’sdiabolical algae blooms or, now memorialized in a hoppy, sour ale, the Creature from the Alegae Bloom.

Lake Erie’s algae blooms result from an overabundance of blue-green algae, or cyanobacteria. They emerge during the summer when the spring rains have funneled nitrogen and phosphorous from agriculture and storm runoff into the lake, said Nicholas Mandros, the northwest regional director for the Ohio Environmental Council, which collaborated with the brewery on the beer. During summer, there’s plenty of sunlight and warmth to keep the algae healthy and thriving. And that spells trouble for the 11 million people who depend on the lake for their drinking water.

At Lake Erie, algae blooms have been an issue for the last 20 years, but the situation has worsened over the last 10. It reached new heights in 2014 when levels of a toxic blue-green algae known as microcystin became so high in the water that it wasn’t safe for drinking or brewing beer. In Toledo, 400,000 residents were tough out of luck for three days. The brewery and its accompanying restaurants closed, too.

“[Microcystin’s] one of the most harmful substances out there, so it doesn’t really take a whole lot of it in the water in order for you to feel its effects,” Mandros told Earther. Potential health effects include vomiting, nausea, diarrhea, and pneumonia to name just a few.

This recurring health hazard is what inspired the Maumee Bay’s new green fizzy beer. Brewer Chris Clarke started crafting a recipe for the sour double IPA last year. Eventually, he found the perfect balance of matcha, kiwi, and non-toxic algae that safe for consumption, which give it its green tint. The beer debuted in August, just in time for the lake’s annual bloom.

It’s the perfect summer drink: strong enough to give you a buzz but with such a fruity refreshing taste to balance its heavy dose of hops.

“The beer plays to the idea of finding that balance between growing the crops we need to grow and maintaining our freshwater resources,” Clarke told me after I tasted the beer myself.

These are depressing times to love beer and the environment, not only because algae blooms are threatening the water supply breweries need, but because climate change could also threaten the barley needed to make the beer itself. Climate change is also fueling the growth of these algae by warming waters and pummeling higher volumes of rain onto the landscape, which helps more nutrients ultimately reach the lake.

In short: The situation sucks.

But it doesn’t have to. Our actions can reduce the amount of nutrient runoff fueling algae blooms around the country, and we can also take steps to curb global warming. That’s why the fine folks at Maumee Bay Brewing concocted this drink in the first place: to increase awareness of the problem and encourage action.

For the most part, customers have been into the beer, said Shannon Mohr, the company’s sales and marketing manager. Other breweries have reached out to learn more about how Maumee Bay deals with the lake’s blooms and to add the beer to their taps.

Ultimately, the goal is to never have to brew the beer again, Mohr told me as we sat at the bar. Blooms hit the lake around summertime, which is the only time of year the beer is available. No bloom, no beer. The brewery carries the beer until their latest batch runs out, and they were running low when I dropped by earlier this month.

This sour double IPA is tasty, and it’d be missed, but losing one beer is better than losing them all. Its loss would be mean we’re one step closer to preserving Lake Erie. And that’d be something worth celebrating.

Article from the ‘Gizmodo’ by Yessenia Funes.